We last left our hero wracked with indecision—the scenic sea route fraught with dangers, or the safety of the boring inland trail?

Let me stop here. There used to be a lot more to this story, but I decided to turn my West Coast Trail and Juan de Fuca Trail into a book. I put a lot of effort into rewriting this story so it's a actually well-written, and if you want to read all of the nitty gritty details, please--buy it! =) You'll find it on Amazon.com, both as a print version and as a 99 cent Kindle version. (You can read Kindle books on your computer if you don't actually have a Kindle.) 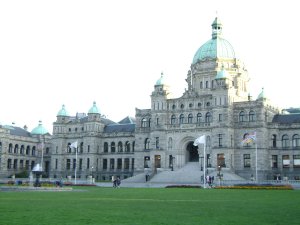 I'd finally take a free tour of the parliament building.

I had two things I wanted to do today. First, I wanted to take that FREE self-guided tour I had heard about in the Parliament building. It was free, and the building looked pretty interesting. And it wasn't a weekend so the building was actually open to the public such as myself. And then, I wanted to visit the Maritime Museum and see the infamous dugout canoe that nearly circumnavigated the globe.

I started with the parliament building. I walked in. No security guards asked to frisk me or check my pack, which kind of surprised me. I could see a couple of security guards loitering about, but they didn't seem interested in making sure the area stayed secure. You'd think the main legislative building of British Columbia would at least check people who enter the building for weapons or something. *shrug*

The area was clearly besieged by tourists such as myself, but I pushed through and got a book (in English—they had options!) about the building and what to look for. It was interesting. The building was designed by Francis Rattenbury, a recent English immigrant and only 25 years old at the time, and officially opened in 1898. The self-guided 'tour' wasn't nearly as extensive as I would have expected, allowing us to go only on two floors, and only small portions of them at that. It did, however, let us go into the main dome and view the legislative chamber where all British Columbia laws apparently are argued on and passed. Not being particular familiar with British Columbia politics, I probably didn't appreciate it as much as a local would have, but I found it interesting anyhow. AND—it was FREE! The price was right. =)

Next, I headed out to the Maritime Museum, but was interrupted by an old man hawking books nearby. He thrust a purple page into my hands, and he proudly claimed to have written all these books. He seemed like sweet old man, very grandfatherly, with a huge smile on his face like he would rather be nowhere else in the world, and I asked what his books were about. Historical works, he tells me, about Victoria and other local areas. The man spoke with an English accent, and out of curiosity I asked where he was from.

I joked with him, "Oh? So nearly your whole life?" He looked at me, seriously at first, then realized I was joking—he was obviously much older than 40. I'd have guessed in his sixties or maybe even seventies.

Once he realized I was joking, though, he laughed and said, "Oh, no, I'm eighty!"

We talked a bit more, and I figured his books were probably lame—more of a wanna-by author than a real author—but I liked the guy so I kept talking to him. When I told him I was from Seattle, he pointed one book out as being partially set in Seattle. It was about a 'mortal angel' from 1916 Victoria who time travels to Seattle in 2000 and falls in love. It sounded hokey to me, but I liked the guy, what can I say? And I let him suck me into buying Whispers Across Time, by J Robert Whittle, and he autographed it for me writing, "To Ryan, Best Wishes, JR Whittle." I

Then I continued on my way the maritime museum. I spent several hours there, reading through all the displays and exhibits. It's a fascinating place, and I found the Tilikum, the dugout canoe I read about earlier. It was larger than I imagined, but still surprisingly small to go through the open ocean, through storms, and survive. (And, in fact, one of the helpers he had allegedly 'fell' overboard during one storm, never to be seen again. Did he really fall? Or was it murder...?)

The building used to be courthouse, and one judge, Richard Matthew Begbie, had so many people hanged there he was known as the Hanging Judge, and the top floor has recreated the courtroom of the Hanging Judge. An article about the building, hanging by the gift shop downstairs, describes the building as being haunted and the strange things people have seen and heard. I kept my eyes and hears open for ghosts, but saw nothing. Not a hint or a wiggle.

By the time I finished here, it was getting late enough that I figured most tourist places that I'd likely find interesting would be closed or about to close, so I headed back to the hostel for the night, reading books, watching TV, and catching up on the Internet.

Craigdarroch Castle, what an amazing place!

The next morning, I walked out to Craigdarroch Castle. I picked this for two reason: One, the hostel had discounted entrance tickets for it, and two, it was within easy walking distance unlike the famed Butchart Gardens. The weather was overcast and threatened to rain, but the rain held off during my walk. When I entered the front, the girl at the register look at my pack and her eyes about popped out. My ride on the Victoria Clipper back to Seattle was later that afternoon, but I had to check out of the hostel by 11:00. So I decided just to carry by pack around rather than store it anywhere. After I finished the trail, it was nearly empty of food and weighed about 25 pounds—not especially strenuous to carry around.

It was, however, very unusual for people to walk into Craigdarroch Castle with such a large pack. The girl offered to store it for me in a nearby closet while I toured the building, and I happily took her up on the offer. They handed me a map building with descriptions about each of the rooms. The front of the map had this to say:

Completed in 1890, the fortune amassed by coal baron Robert Dunsmuir is reflected in the Castle's four floors of exquisite stained glass, intricate woodwork and lavish Victorian-era furnishings. The original estate extended over 28 acres.

Since Joan Dunsmuir's death in 1908, the Castle has been used as: Craigdarroch Military Hospital; Victoria College; offices for the Victoria School Board; Victoria Conservatory of Music; and finally as Craigdarroch Castle Historic House Museum.

Sounds like the building has quite an interesting history! Unfortunately for Robert, he died the year before the building was completed and never got to live in his dream house. Bummer for him.

The girl at the register asked for me to use the shoe cleaner before I entered any further. It had bristles on the bottom and sides to knock of dirt and grime, and there was a lever that, when pulled, made the bristles spin. My shoes were still caked in mud from the hike, so I was thrilled to give my shoes a 'deep clean' that this device provided! Why didn't they have this where I got off the trail?! When I got through using it, my shoes looked almost as clean as they did when I started it.

I probably spent a good hour or two walking through the building and reading everything they had hanging about the place, where the self-guided tour ended in the gift shop. (Of course!) I left out the back door and returned to the front to retrieve my pack and walk back downtown. 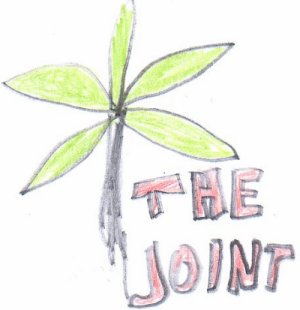 Don't miss out on the cheesy bread rolls at The Joint!

I still had a few hours before I needed to report in for my ride back to Seattle, and decided to hang out at The Joint, because if there's anywhere to hang out, The Joint sounds like the place to do it. =)

One of the other folks staying in the hostel recommended it to me as a good pizza place the night before, so I decided to try it for lunch. I ordered a slice of pizza and 'cheesy bread rolls.' The pizza—was merely okay. Those cheesy bread rolls are amazing! Pure bliss! I don't know what they put in those, but wow, I could eat those every day of the week. If you find yourself in Victoria, do yourself a favor and order some cheesy bread rolls at The Joint. It might make you fat, but it's so worth it.

And with two hours before I needed to catch the boat back to Seattle, I pulled out Whispers Across Time by my buddy, J. Robert Whittle, and started to read.

The book is a bit corny, but I have to admit, it sucked me in. It starts off with the main character ending up in the Ross Bay Cemetery (hey, I know where that is!) where he becomes a 'mortal angel' and starts doing magical things to help people in need. He's a court reporter, and ends up going to the courthouse where the Hanging Judge is holding a trial. (Hey, I know where that is too!) And one part, where I nearly laughed out loud, describes the two main characters going to present day Victoria, wandering through Bastion Square, and being accosted by a friendly old man named Robert Whittle handing out leaflets about his books. (Hey, wait a minute.... I'm getting a sense of dejavu, now!)

It was a cute story. Perhaps not the most gripping book I've ever read, but I've read a lot of bestsellers that weren't half as entertaining either. *shrug*

Alas, it was time for me to return home. I walked to the Victoria Clipper. Waited for it to board. Then boarded.

The rest of my trip was rather uneventful. The boat arrived on time in Seattle, I cleared through customs and immigration quickly. (I didn't check my pack this time—it was small enough that they let me carry it on.) I walked up to Third and jumped on a bus heading to West Seattle. I made it. My hike was done.